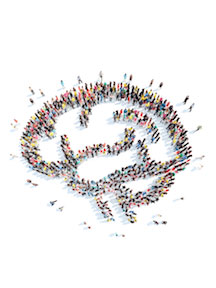 The start of a new year can signal several truths for college students. A new semester is upon them, with fresh classes and curriculum. Colder temperatures are settling in on campuses across the country. But for many college seniors, spring semester signals the beginning of an important journey: the job search.

This period can be unnerving for many soon-to-be or recent graduates, as well as for those further on in their careers who are approaching the search once again. However, job seekers may be comforted to find they are not alone. There are many networks of individuals willing to offer support; it is simply a matter of knowing where to find and how to utilize them.

Looking for a great place to start? Seek out organizations that are designed to bring like-minded intellectuals together. For its members, Phi Beta Kappa is this network.

Phi Beta Kappa plays host to dozens of alumni associations based throughout the United States and in London. These organizations carry out the society’s mission on a smaller scale and act as catalysts for continued learning through sponsored lectures, social events, service opportunities, and scholarship programs. Still, as several ΦBK association leaders agree, networking is a growing priority.

Many associations regularly host successful networking events in the form of social gatherings. Jacques Ohayon, president of the ΦBK Association of New York, states that events are “usually based on mutual interests such as art, music, and volunteering.” For example, one recent activity organized by the New York association was “How to Better Communicate for Success: For Entrepreneurs and Business Owners,” but the association also holds more informal gatherings where opportunities for connecting with other ΦBK members abound.

Ray Hendess, communications officer for the ΦBK of Northern California Association (ΦBK NCA), reiterates the success of networking at social events. “There are opportunities for informal networking at these events, but the aim is usually educational or just an interesting place to go,” Hendess says. Chapter Liaison for ΦBK NCA Amanda Sanyal adds, “Traditionally, the events we plan are all centered around a purpose—a tour, a talk, a concert, etc. These meet-ups will be more causal to encourage fellowship.” Networking can be, and often is, part of that fellowship.

Events hosted by ΦBK associations can have a more pointed, professional focus. Howard Fencl, immediate past president of the ΦBK Association of Cleveland, cites as an example “Key & Tea,” which is “an informal conversation led by a ΦBK Cleveland member with specific subject matter expertise, such as intellectual property rights, local ballot issues, and media relations,” Fencl explains. Current President Deborah Wilcox adds, “One of our other successful networking events was an ice cream social we had at an entrepreneurial local ice cream shop, complete with a presentation from the founder as well as a Q&A session.”

Interested members can learn more about these and other opportunities by contacting their nearest ΦBK association. Some, like ΦBK NCA, even waive first-year membership fees for newly inducted ΦBKs.

Sanyal of ΦBK NCA notes, “Trying to entreat younger members to participate is one of the reasons our board recently decided to start hosting more casual meet-ups and using social media to promote them.” Katie Strunk, president of the ΦBK Association of Boston, also hopes increasing online activity will boost ΦBK networking among recent graduates. The Cleveland and New York associations like to host events at city hot spots or locally-owned, up-and-coming businesses attractive to new members. “We want to grow the next generation of leadership,” Fencl emphasizes.

But once you arrive at a ΦBK networking event, how do you proceed to make useful connections?

“It’s best to be open, honest, and straightforward,” Fencl advises. “If you’re just out of undergrad looking for your first career assignment, or you’re mid-life and suddenly find yourself downsized from your corporation, everyone at networking events EXPECTS to be approached […] be conversational and professional in your approach, just as you would be in an interview.”

“Follow-up with a phone call if possible—don’t hide behind e-mail,” Fencl adds. “Be persistent, but don’t be insistent.”

Networking is a process professionals engage in throughout their careers, and students are only beginning this journey. Luckily, these job seekers are not alone—Phi Beta Kappa associations are here to help.