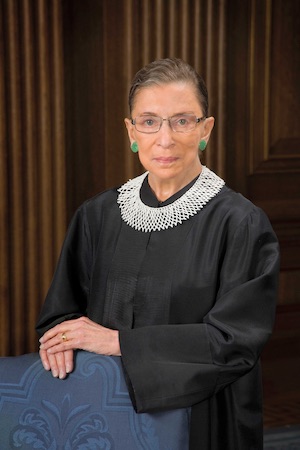 Ruth Bader Ginsburg served as an associate justice of the Supreme Court of the United States from 1993 to 2020. She was only the second woman to be appointed to the Court. Born Joan Ruth Bader on March 15, 1933 in Brooklyn, New York, Ginsburg went on to graduate from Cornell University, where she became a member of Phi Beta Kappa. After graduating in 1954, she married Martin Ginsburg, and both continued their education by pursuing degrees from Harvard Law School.

While in law school, Ginsburg balanced raising a child, being one of only a handful of women at Harvard Law, caring for her husband while he had testicular cancer, and being one of the first women on the Harvard Law Review. For her last year of law school, Ginsburg transferred to Columbia Law, graduating first in her class in 1959. Despite her resilience and academic excellence in law school, Ginsburg still struggled to overcome the challenges of sexism and workplace discrimination in the 1960s. She clerked for U.S. District Judge Edmund L. Palmieri before becoming a professor at Rutgers Law School and then Columbia Law School, where she became the first female professor to earn tenure.

In the 1970s, Ginsburg directed the Women’s Rights Project of the ACLU, focusing on sex discrimination in the law. In this role, she pioneered the fight for gender equality for both men and women, successfully arguing six cases before the all-male Supreme Court. At issue were questions such as receiving benefits based on gender, husbands being able to claim military spouse dependency, and women being unconstitutionally exempted from serving on juries. As the New York Times put it, “Her goal — to persuade the Supreme Court that the 14th Amendment’s guarantee of equal protection applied not only to racial discrimination but to sex discrimination as well — was a daunting one. The Supreme Court under Chief Justice Earl Warren, famous for its liberal rulings across a variety of constitutional fronts, had never recognized sex discrimination as a matter of constitutional concern.”

In addition to directing the Women’s Rights Project, Ginsburg served as the ACLU’s general counsel from 1973 to 1980. She also continued her Phi Beta Kappa connection, becoming a Visiting Scholar for the 1973-1974 academic year. In 1980, Ginsburg was appointed to the U.S. Court of Appeals for the District of Columbia by President Carter, serving for 13 years before her appointment to the Supreme Court.

As an associate justice, Ginsburg continued to fight for gender equality. In 1996, she wrote the majority opinion for the case United States v. Virginia, where the Court ruled that qualified women could not be denied admission to Virginia Military Institute. In the opinion, Ginsburg defended, once again, women desiring to reach outside the status quo, writing: “Generalizations about ‘the way women are,’ estimates of what is appropriate for most women, no longer justify denying opportunity to women whose talent and capacity place them outside the average description.” Beyond the majority decisions, her scathing and powerful dissenting opinions also earned her a public reputation and a nickname: Notorious R.B.G.

During her time on the Court, Ginsburg battled numerous health concerns. According to Oyez, despite these challenges, “until the 2018 term, Ginsburg had not missed a day of oral arguments, not even when she was undergoing chemotherapy for pancreatic cancer, after surgery for colon cancer, or the day after her husband passed away in 2010.”

Justice Ginsburg passed away on September 18, 2020. In statements released from the other Justices following her death, Chief Justice John G. Roberts, Jr. (ΦΒΚ, Harvard University) wrote, “Our Nation has lost a jurist of historic stature.” Continuing these sentiments, Justice Elena Kagan (ΦΒΚ, Princeton University) wrote, “To me, as to countless others, Ruth Bader Ginsburg was a hero. As an attorney, she led the fight to grant women equal rights under the law. As a judge, she did justice every day — working to ensure that this country’s legal system lives up to its ideals and extends its rights and protections to those once excluded. And in both roles, she held to — indeed, exceeded — the highest standards of legal craft.”