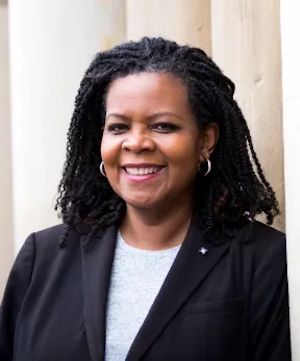 Annette Gordon-Reed, the historian and law professor whose scholarship has reshaped our thinking about presidents and entire periods of American history en route to awards such as the Pulitzer Prize and a National Humanities Medal, received Phi Beta Kappa’s Award for Distinguished Service to the Humanities at the 2021 triennial council. The award includes a cash prize and a medal named for Mr. and Mrs. William B. Jaffe, whose gift of $25,000 enabled the Society to create it in 1970.

Gordon-Reed presently serves as Carl M. Loeb University Professor at Harvard, where she teaches both in the faculty of arts and sciences and at the law school. She has previously served on the faculties of Rutgers University and New York Law School and, prior to entering academia, worked as an attorney in New York.

In 1997, Gordon-Reed published her first book, a provocative examination of the relationship between Thomas Jefferson and Sally Hemings (and how historians had analyzed it, often overlooking or dismissing the accounts of African Americans) that spurred subsequent historical and biological analysis and has led scholars to conclude that Jefferson did father Hemings’ children. She subsequently published a biography of the Hemings family that sought to tell their stories as individuals, not mere historical concepts. The book won the Pulitzer Prize for History.

Gordon-Reed’s subsequent work has returned to the form of biography, including of the 17th U.S. President, Andrew Johnson. Her most recent work, On Juneteenth, takes a turn towards memoir as she contextualizes the holiday that commemorates the end of slavery in the United States. Centering people in stories helps fulfill humans’ innate desire to understand and care about one another, Gordon-Reed explained, and that makes for compelling history scholarship.

“Situating a person in a given period allows you to consider how human behavior changes, and does not change, over time,” she said. “If done well, biographies also give you a sense of the time period in which the subject lives. You can explore the weight of a society’s customs, laws—its culture overall—by looking how the studied subject moves through society.”

Gordon-Reed’s efforts to do just that have earned her a string of awards including a Guggenheim Fellowship, MacArthur Fellowship, and in 2010 a National Humanities Medal awarded by President Barack Obama. She is also a fellow of the American Academy of Arts and Sciences and a member of the American Philosophical Society.

For Gordon-Reed, history—and the humanities more broadly—offers a window to look outside oneself in a way that can help us better understand ourselves.

“[The humanities] promote inquiry, critical thinking, and can push us to seek knowledge about the past,” she said. “This, in turn, gives us the opportunity to make better choices, if we choose to learn from the mistakes of the past.”

But the humanities offer more than mere instrumental benefits and ought to be considered “important for their own sake,” Gordon-Reed explained. “The appreciation of art, music, and literature should be considered ends in themselves.”