The Gun, the Ship, and the Pen:  Warfare, Constitutions, and the Making of the Modern World 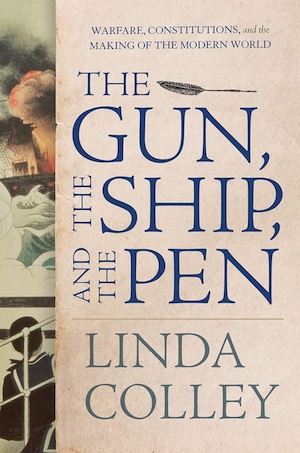 Why written constitutions became ubiquitous throughout the world after the mid-18th century is the sort of grand historical question that most scholars instinctively shy away from. Students of constitution-making have instead routinely narrowed the scope of their inquiries in three ways: by selecting a particular country to investigate, by focusing on the internal dynamics that led the country to adopt a foundational political document, and by analyzing the ideas and principles that inspired the provisions contained in that document. Linda Colley sets out to burst all three shackles by looking at many instances of constitution-making drawn from diverse regions, by situating the adoption of constitutions in those countries’ external milieux, and by connecting the contents of constitutions to the practical exigencies of statecraft.

The Gun, the Ship, and the Pen offers a wide range of scintillating vignettes that illustrate the various ways that constitutions have taken shape over the past quarter-millennium. Early 19th-century Tahiti is accorded as much attention as contemporaneous Norway, Calcutta, and Mexico. The United States of the Civil War era is juxtaposed against the beylicate of Tunis. What is hypothesized to join these disparate cases together is the impact of armed interstate conflict. “Rising levels of warfare,” Colley asserts, “tempted and obliged . . . rulers . . . to devise and publish new written texts to reorder their states and reach out to their respective populations.”

Social scientists will immediately wonder what the causal process might be that connects interstate warfare to the emergence of written constitutions. For Meiji Japan, the constitution came when encroaching external powers sparked an internal revolt and the ruling coalition created a mechanism to carry out administrative reforms. Two decades later, a revised Japanese constitution was drawn up as an instrument to impose order and discipline in a deeply fragmented society. For Napoleonic France, constitutions were dispersed to conquered countries as a way of inculcating republican values and incorporating new territories into the imperial realm. For North Africa, weak states threatened by powerful neighbors adopted constitutions as a means of protecting themselves from attack. Ambitious rulers of Oceania drew up constitutions as way to enhance and codify their personal authority in the face of Euro-American cultural intrusion. For the Russian Empire, a monarch who had come to power in a questionable way formulated a foundational document in order to gain a measure of legitimacy. Clearly no single line of argument leads from war to constitution-making.

Colley proposes instead that written constitutions have resulted from an underlying change in world politics that occurred around 1750: “a growth in the geographical range, frequency, intensity and demands of warfare and cross-border violence.” The change is also called a marked increase in “the regularity with which large-scale wars erupted across the globe.” The only evidence that is given for this crucial shift is one extraordinarily dense graph showing the total number of deaths in armed conflicts for each year from 1400 to 2000, prepared by a team of developmental economists at the University of Oxford. It goes without saying that total deaths is a poor indicator of the frequency or regularity of the wars in which they happen. There is a massive literature in international relations concerning the historical patterns of interstate warfare, and the consensus is that wars have become less frequent over time. An opportunity for fruitful cross-fertilization across academic disciplines has been missed.

Social scientists might also wish that the book had paid more careful attention to what it proposes to explain. Constitutions come in many different types and can undertake a broad range of tasks. Some merely spell out the basic institutions and procedures of governance, whether those be monarchical, authoritarian, or democratic in nature. Others codify constraints on the ruler, and still others recognize rights that citizens enjoy. Colley makes no distinctions, and implies that all constitutions are liberal-democratic in character. If the study had instead distinguished documents that codify governing institutions from ones that enshrine citizens’ rights, it would have been able to explore the circumstances in which different types of constitutions emerge.

The Gun, the Ship, and the Pen opens the door to further research on constitution-making that is truly global and moves beyond conventional legalistic accounts. Such an ambitious and important project deserves to be superseded by interdisciplinary contributions that meld the historian’s respect for nuance and inclusiveness with the social scientist’s methodological rigor.